Kinpira gobo burdock root is the popular Japanese vegetable recipe. Kinpira is a cooking style involving stir frying and simmering with sugar and soy sauce. Carrots, lortus roots, and celery are also delicious for kimpira. For Shojin-Ryori the monks cooking is no waisting any food for a religious reason.  They use many vegetable skins for this recipe (ex: sweet potato skin, etc.)

What is Gobo? – the greater burdock

Gobo the greater burdock was used during the Middle Ages as a vegetable, but now it is rarely used, with the exception of Japan where it is called gobō (牛蒡 or ゴボウ), Taiwan (牛蒡), Korea where it is called ueong (우엉), Italy, Brazil and Portugal, where it is known as bardana. Plants are cultivated for their slender roots, which can grow about 1 meter long and 2 cm across.Immature flower stalks may also be harvested in late spring, before flowers appear. The taste resembles that of artichoke, to which the burdock is related. Gobo the greater Burdock is rather tall, reaching as much as 2 metres. It has large, alternating, cordiform leaves that have a long petiole and are pubescent on the underside. If you want to find more, read Wikipedia Greater burdock page. 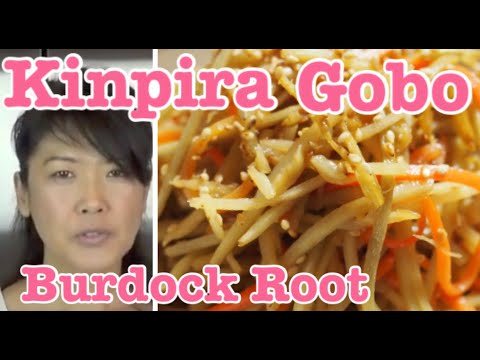 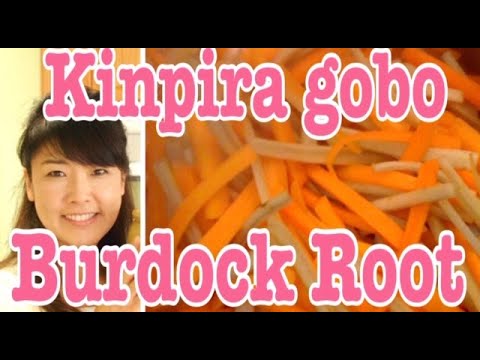 2. Heat seame oil in a frying pan or pot with chili pepepr flakes or chili pepper, and stir fry gobo root and carrots over high heat

3. Add all sauce ingredients, put otoshibuta and cook down until almost all the liquid is evaporated.