I used Okonomi-yaki no kona (Flour for Okonomi-yaki) but you can make it without this kona.
You can use regular flour, but I recommend to add the Yamaimo (mountain yam) potato. Yamaimo potato is a slimy potato and you may need to go in Asian grocery store to buy it. If you can not find it, use a regular potato. Potato gives you fluffiness and a not so floury after taste when you eat this pancake.  If you use regular flour, you should use Dashi instead of water.  Also put 1 tsp baking powder. 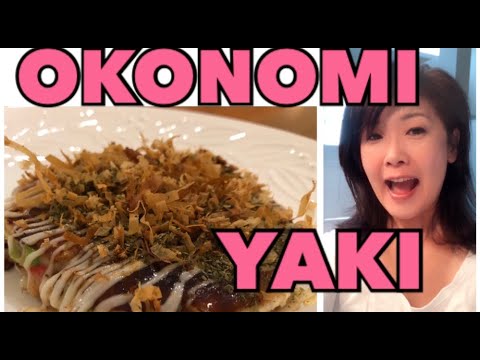 If you go to an Okonomi-yaki restaurant in Japan, you may choose ingredients from a set lis of ingredients.
I usually like to put cheese and Mochi in mine.
Also, pickled ginger and Koebi, which I put those for options. But if you want put your Japanese pancake/pizza to taste like real Okonomi yaki restaurant’s, so I’d put them in there. This is what I put in to my Japanese Okonomiyaki recipe this time.
You make the batter first and put in the other ingredients. I put Age dama in last.
I belive Age dama is for crunchiness and if you put this in first, Age dama absorbs out the liquid and it won’t be crunchy.

This is how to make Age dama Mix together Tempra Ko (Tempra flour) and water then deep fry it.  Drop very small amount into the hot oil.
Be careful not splash the oil but if you drop batter in the oil high enough, it makes small drops like the picture above.
When it becomes brown, you take it out of the oil and put it on a paper towel to absorb the extra oil. Lastly, put all ingredients together and mix them.

Put oil on a frying pan and drop in an egg, and put the mixed okonomi-yaki batter on top.  Cook it until the bottom browns and flip it over.

Do not push or smash the top, just let it be and cook the other side.  I put lid over it for a minute to make sure it cooks inside, especially if you put meat in the batter.  I flip one more time and make sure it is cooked inside.
When it’s done, takeout of the pan and put it onto a plate.
Top the pancake with sauce, mayonaise, Katsuobushi flakes and nori, if you have them.

At least, Be sure to put on the sauce and mayonaise for the best taste! I found this Otafuku sauce company page and they have a page how to cut cabbage. I know this is a Japanese web page and you may not read it. However, you can see the picture so you can use their tips.