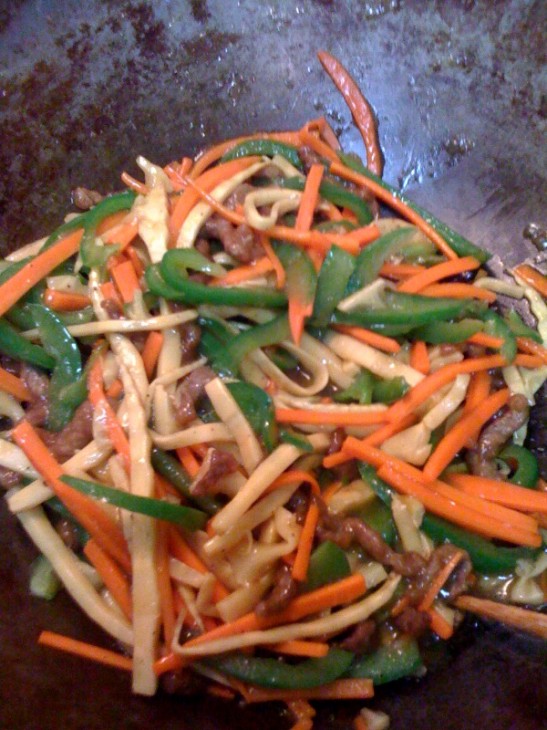 This is Chinjao Rosu green pepper steak recipe. It is a popular food in Japan. Its origin is a Chinese recipe called qīngjiāo ròusī. I read that Chinese qīngjiāo ròusī has a little bit different ingredients than the Japanese one. The Chinese recipe has only bell pepper and meat. The Japanese one usually has bamboo shoots. This is what Wikipedia said: Evidence for the dish’s existence in the United States dates from at least 1948.[1] The dish originated from Fujian cuisine, where it was known as qīngjiāo ròusī (青椒炒肉絲)[1]. In the original dish the meat that was used was pork and the seasonings were relatively light compared to pepper steak. A similar dish, called chin-jai rōsu (青椒牛肉) is found in Japanese Chinese cuisine.

1. Slice beef thin and cut it into long skinny strips shaped like a string.

2. First put the cut meat in a bowl and add soy sauce and potato starch. Mix it together.

3. Put the meat into a deep fryer and deep fry it. Take it out and take off the extra oil. You can remove the extra oil with a paper towel. You don’t need to fry the meat for a long time. The meat is thin, so it will cook very quickly.

5. Put oil in the frying pan and heat it up well.

6. First cook carrots, then bamboo. I usually put in 1/2 cup water and cover with a lid. This way, carrots and bamboo will cook well. You can put in the meat next or bell pepper. If you add too much heat to the bell pepper, its color will change. So, I usually add this last when I cook it. After you mix it all together and cook it, put in soy sauce, salt, pepper, mirin and sake.

7. Lastly, you pour potato starch with water into the wok and stir. This thickens the sauce.