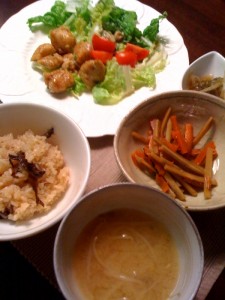 There are not so many Japanese cooking shows on TV. I mean, those introducing Japanese foods and teaching you authentic Japanese recipes. Some Japanese recipes are even quick and easy recipes! So you can easily try them in your home.

Food is a culture – big time culture – in Japan. I believe Japanese food culture is one of the best in the world. Japanese people are pretty much gourmets. In Japan, there are many TV shows that introduce new restaurants every day. You would be surprised that almost any Japanese TV channel has restaurant or hotel meal shows every minute of air time. You often see so many people waiting in line in front of the restaurants in Japan. Those are the restaurants they just saw on the show the night before.Just like Sony, Panasonic, Honda and Toyota, Japanese people are very good to adopt foreign products and make them much better. Japan does the same for food. I heard of an Italian business man who came from Italy and my co-worker took them to an Italian restaurant in Japan. They said they liked it very much and it was better than in Italy. Do you know the Michelin Restaurant guide in Tokyo was started selling in 2007? For example, the wine, Beaujolais Nouveau, was the second most imported wine into Japan. Japanese people truly like to have good food and it has been a custom in Japanese culture.

If you love cooking, you will enjoy new tastes from Japan. I want people to know that some Japanese restaurants, they call themselves Japanese, are not even close to real one. If you know the good taste of Japanese cooking, you can choose great tasting foods and restaurants yourself.

Have you ever been in an Asian Grocery store? I bet you wanted to try some products and groceries. Maybe you saw some easy Japanese cooking products like instant or boxed foods but you were not quite sure what the package contains and were scared to try it. Or, you saw something that looked really weird and you may say “What can I do with this?” You may find something looking and sounding familiar to you, but you do not read the writing on Japanese recipes so you didn’t buy it.

Well…I feel this way! In my case, it’s not Japanese food, but some other exotic food.