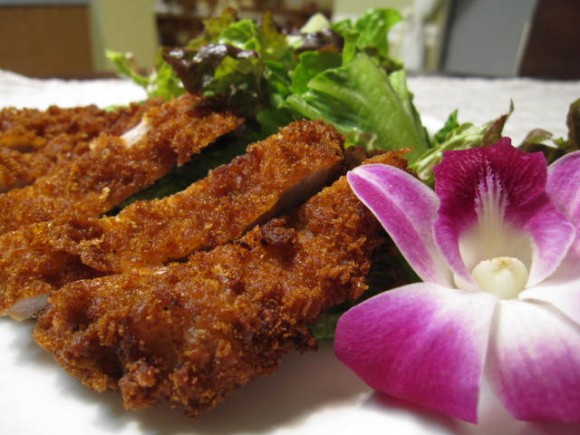 Japanese Pork loin recipe, Katsu or Tonkatsu (豚カツ, とんかつ, or トンカツ, pork cutlet)  invented in the late 19th century, is a popular dish in Japan. This Japanese Pork Loin recipe consists of a breaded, deep-fried pork cutlet (= Katsu, Japanese pronunciation) one to two centimeters thick and sliced into bite-sized pieces, generally served with shredded cabbage and/or miso soup. Either a pork fillet (ヒレ, hire) or pork loin (ロース, rōsu) cut may be used; the meat is usually salted, peppered, dredged lightly in flour, dipped into beaten egg and then coated with panko (breadcrumbs) before being deep fried.[1]

Katsu was originally considered a type of yōshoku—Japanese versions of European cuisine invented in the late 19th and early 20th centuries—and was called katsuretsu (“cutlet”) or simply katsu.[2]

Early katsuretsu was usually beef; the pork version, similar to today’s tonkatsu, is said to have been first served in 1890 in a Western-food restaurant in Ginza, Tokyo.[3] The term “tonkatsu” (“pork katsu”) was coined in the 1930s.

Tonkatsu has Japanized over the years more than other yōshoku and is today usually served with rice, miso soup and tsukemono in the style of washoku (traditional Japanese food) and eaten with chopsticks. Recently, some establishments have taken to serving tonkatsu with the more traditionally Japanese ponzu and grated daikon instead of tonkatsu sauce.

If you want to know more, read this page.

1 Cut pork loin1/3 inch thickness. Use back side of the knife and pound the meat for the meat sinew.
Salt and pepper on the meat, both side.  Make a butter of flour, eggs and milk.

** I supposed to put flour to cover the meat after salt and pepper, I forgot to it.  I am sorry for no picture of that.

2 You should put flour on the meat before dipping in batter.  This makes the meat juicy and butter stick on the meat easily.  Dredge meat in to the flour and shake off extra flour before puttint into the batter.

4 You can use dried Panko from store, but I strongly recommend to use panko from fresh bread.  If you have food processor, use them to make fresh panko.  This way meat have more moisuture and juicy.

6 Use cooling rack for Tonkatsu.  If you put on the flat plate, the panko will be less crunchy.  If you want to make crunchy deep fried food, you should use a cooling rack to drain off extra oil.

This Katsu cooking method was on Japanese TV and it will actually cook very good and no mistakes.  It you over cook Katsu, meat will be tuff or dry but this way, meat is juicy.

You can see this picture, Pork is is perfectly done! 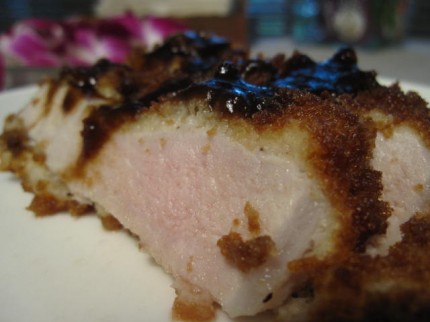 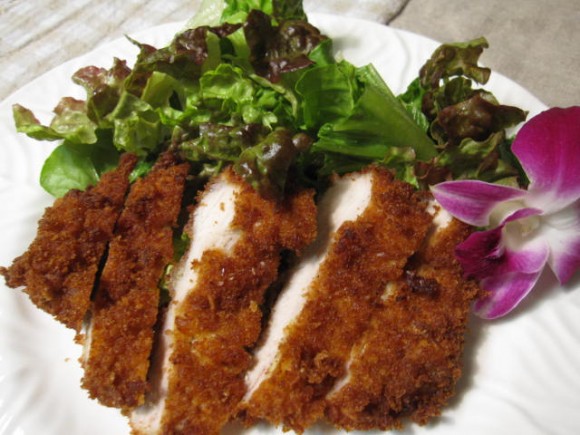